“But I thought my RV’s black holding tank was a septic tank?” 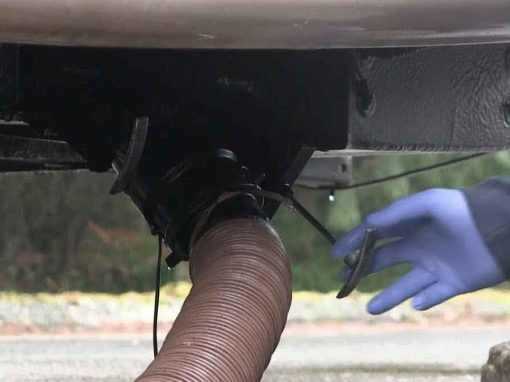 You’ve heard the industry “experts.” They say that you need to treat your RV’s holding tanks like a septic system and add tank additives to break down waste. But is that the wise thing to do? We think not. Read why there’s a better way to think about your holding tanks. Holding tank solution manufacturers, RV sales centers, and even rally vendors claim “miracle” tank solutions will solve your problems: They’ll get your tank’s sensors reading correctly, they’ll eliminate odors, and your tanks will empty faster and more completely. Are they right? Not even close.

It’s called a holding tank for a reason

Your RV’s holding tanks are just that — holding tanks. They are designed to hold waste from your RV (either the toilet, sinks, or shower) until they are full, when you pull the release valve and the tank’s contents empty into the RV park’s waste system (and then, likely, into a municipal waste processing system).

Why isn’t is a septic system?

In a septic system, waste is broken down into a liquid (or, less solid) form and then disposed of (also the the RV park’s waste system when your holding tanks are full). In a septic system, a tank solution chemical, enzyme, or biological is added to the tanks, usually as a liquid, powder, or even degradable pod. But those same chemicals, enzymes, or other biological agents break down waste into a pancake batter — thick, sticky, and likely to be now fouling up your holding tank’s sensors. And besides misreading sensors, that sticky mess never truly drains out of your black holding tank. Some of it stays behind, in your tank, each time you pull the tank valve release. Over time, more and more builds up, causing more and more problems.

Why is that a bad thing?

Think of it this way: What would exit a holding tank quicker and more completely? A tank full of thick, sticky pancake batter-like waste or a tank of water with solids floating around in it? The second situation, of course. Start treating your RV’s holding tanks less like a septic system and more like what they’re named after — to hold waste in a mostly liquid form with some solids suspended and floating, until the tanks are full and emptied.

We're developing our quarterly newsletter of great topics. Get your name in now for great tips, advice and special offers!

we'd love to hear from you

Send us an email

It's simple -- our service:

Fixes and corrects your RV's tank sensors almost every time

Is environmentally safe and makes no mess at your site

Is chemical-free and all-natural

we'll get right back to you